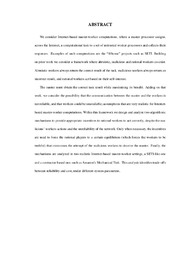 We consider Internet-based master-worker computations, where a master processor assigns, across the Internet, a computational task to a set of untrusted worker processors and collects their responses. Examples of such computations are the “@home” projects such as SETI. Building on prior work we consider a framework where altruistic, malicious and rational workers co-exist. Altruistic workers always return the correct result of the task, malicious workers always return an incorrect result, and rational workers act based on their self-interest.The master must obtain the correct task result while maximizing its benefit. Adding on that work, we consider the possibility that the communication between the master and the workers is not reliable, and that workers could be unavailable; assumptions that are very realistic for Internetbased master-worker computations. Within this framework we design and analyze two algorithmic mechanisms to provide appropriate incentives to rational workers to act correctly, despite the malicious’ workers actions and the unreliability of the network. Only when necessary, the incentives are used to force the rational players to a certain equilibrium (which forces the workers to be truthful) that overcomes the attempt of the malicious workers to deceive the master. Finally, the mechanisms are analyzed in two realistic Internet-based master-worker settings, a SETI-like one and a contractor-based one, such as Amazon’s Mechanical Turk. This analysis identifies trade-offs between reliability and cost, under different system parameters.