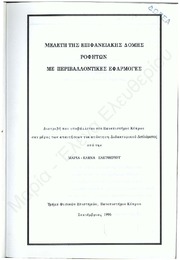 This thesis presents a study into the surface stucture of adsorbents that have the potential of being used in environmental applications. The surface properties of synthetic template-free Na-ZSM-5 microporous zeolites, of a sample of the pure silica end member of the MFI series, Silicalite I, and of synthetic goethite, a-FeOOH, were studied by N2 adsorption isotherm measurements, FTIR / DRIFTS spectroscopy and TGA analysis. The isothermal experimental results of the four ZSM-5 zeolites that had-been synthesized without the presence of organic base under varying conditions confirmed the microporosity of the samples. The aggregation of the relatively small crystallites caused the appearance of hysteresis all along the pressure axis of the isotherms. An anomalous shape of adsorption type I isotherm was obtained for one of the samples of high NaOH:SiO2, exhibiting a descending curvature towards higher relative pressures. This was attributed to the reorganization of clathrate structures within the zeolitic voids and areas of defects, effected by the increase in -OH. This increase resulted to the change in aluminium distribution within the sample and to an increase of internal structure defects during synthesis. The presence of clathrate water was evidenced by i.r spectroscopy, in which the characteristic Η-bonded -OH peaks were present at all working temperatures. A double-stepped isotherm along with its low pressure hysteresis was observed regarding the sample of Silicalite I, as far as the adsorption of nitrogen is concerned. These results agree with those of other researchers. However, a more diffuse hysteresis loop characterising these samples was evident towards higher relative pressures. This can be attributed to defects occuring in the sample. The two substeps 'α' and 'β', both attributed to special packing arrangements of the sorbate molecules inside the microporous channels, correspond to a phase transition of the adsorbed nitrogen, on physisorption, from a lower to a higher densification state. The spectroscopic measurements which were carried out to characterise the surface structure of Silicalite I confirmed the anomalous abundance of -OH groups that dominate the crystal. The chemisorption of pyridine on this zeolite identified its acid centres as being of Lewis acid character. Experimental results showed that α-FeOOH undergoes a structural change to a corrundum α-Fe2O3-like structure at elevated temperatures, thus altering its surface and consequently its cationic exchanging properties. The adsorption of Cu2+ on the mesoporous surface of goethite led to the conclusion that protons are exchanged for copper ions in a ratio of 1:1 via an inner sphere surface complex.