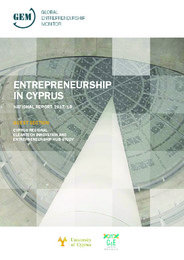 Entrepreneurship is the principal mechanism for materializing the impact of technological innovation on economies and societies. Technological innovation is, in turn, the ultimate source of productivity improvement and the main driver for economic growth. Consequently, innovation and entrepreneurship have become top policy priorities in the national agendas of countries that strive to deliver prosperity for their citizens through economic growth, job creation and poverty reduction. What are the factors that determine the status of entrepreneurship in societies around the world? How can we observe and measure those factors and track their evolution in time as societies and economies evolve? Addressing those questions is the goal of the Global Entrepreneurship Monitor (GEM), the leading worldwide study on entrepreneurship. GEM was initially conceptualized in 1997 and is currently considered as the most authoritative and informative longitudinal study on entrepreneurship in the world, covering all geographic regions and economic levels. The GEM conceptual framework is based on the assumption that national economic growth is the result of the personal traits and capabilities of individuals to identify and seize opportunities, and that this process is affected by environmental factors that influence individuals’ decisions to pursue entrepreneurial initiatives. Therefore, GEM seeks to capture the attitudes of societies towards entrepreneurship, the characteristics, motivations and ambitions of entrepreneurs, and the quality of entrepreneurial ecosystems in different economies. GEM accounts for specific contextual factors, which are considered influential in creating unique business and entrepreneurial contexts, such as social, political, and economic. Measuring and understanding the factors that affect the status of entrepreneurship is important in order to drive policy-making that can lead to solid productivity improvements and a positive change in economic activity. Policy making in the modern world is particularly challenging, as it needs to take into account the rapid and profound changes brought by exponential progress in technology, the unprecedented acceleration of globalization and the onslaught of climate change. Exponential progress in knowledge and technology makes most new technologies obsolete very fast. The cycle of innovation, which comprises experimentation, learning, knowledge application, and assessment of success or failure - is becoming shorter than ever. Automation, Artificial Intelligence, and the 4th Industrial Revolution are disrupting whole economic sectors and threaten to render a variety of blue and white collar jobs across numerous sectors obsolete. Globalization is leading to the acceleration of global flows of information, knowledge, people, commerce and finance, making the world hyperconnected and interdependent with markets, businesses, governments and societies interwound more tightly together than ever. Climate change raises unexpected challenges and threats that may require radical solutions to problems of great complexity and scale; such solutions might call for the deployment of innovative inventions, in synchrony with the mobilization of society and a radical change of mindset at a global scale. The aspiration of the Cyprus GEM National Report is to analyze the status and evolution of entrepreneurship in Cyprus through the lens of modern-world challenges. We believe this is important for informed, timely and agile decision-making. What are the key observations from the 2017/2018 survey? On the positive side, we observe that there is a constantly positive perception about entrepreneurship and entrepreneurial opportunities in Cyprus, and that an encouraging percentage of the population expresses entrepreneurial intention. Physical, commercial and legal Infrastructures are considered to be on par with the European average, while government policies regarding taxes and bureaucracy are considered more positive to entrepreneurship than the EU average. In comparison to 2016/2017, it seems that an improved awareness about entrepreneurship is helping Cypriots to develop a more pragmatic view of the challenges involved in undertaking entrepreneurial activity. However, this is combined with an increased fear of failure and a weaker access to finance in comparison to the respective EU averages. Moreover, the riskreward balance offered in Cyprus appears rather limited, due to the small size of the country, the lack of highly specialized talent, and the sparsity of networks that connect local entrepreneurs and innovators with global finance and big markets. These factors can deter the up taking of high-risk or unconventional entrepreneurial activities. The GEM surveys for Cyprus of the last two years depict a country in transition from the financial crisis of 2012- 2013 into a future that is still uncertain. Total Early-Stage Entrepreneurial Activity (TEA) seems weaker compared to last year (7.3% in 2017/2018, 12% in 2016/2017). Most of the TEA entrepreneurs in Cyprus are opportunity-driven rather than necessity-driven. However, there is still a notable gender gap between female and male TEA entrepreneurs as the ratio between females and males involved in TEA is 0.6. Most of TEA is recorded in Wholesale and Retail sectors (45.4%), whereas rapidly growing sectors with strong innovation potential in globalized marketplaces, like ICT, renewable energy and intelligent manufacturing, have a modest contribution to TEA. Also, entrepreneurs involved in TEA do not foresee substantial creation of new jobs (46.6% expect no new jobs). Few entrepreneurs consider that their TEA activity is internationally oriented (10%), whereas activity relevant to medium-tech or high-tech is very limited (4.9%). These can be a source of concern for the future of economic competitiveness and job creation in dynamic economic sectors. Beyond the impact of entrepreneurship on Cyprus’ economic competitiveness and job creation, entrepreneurship can largely contribute to the altering of climate change and the protection of the environment. This year’s guest section emphasizes on green entrepreneurship. Drawing on international best cleantech practices, it provides recommendations to assist Cyprus in becoming a regional Cleantech Innovation and Entrepreneurship Hub for the Middle East and North Africa (MENA) region. Cyprus’ participation in GEM fosters the generation of data on the country’s entrepreneurship status across time and allows the comparison with other countries. This year’s GEM report analyzes the status of the entrepreneurship in Cyprus as it has evolved between 2016/2017 and 2017/2018 and compares it to corresponding European average values. It then outlines several policy making recommendations organized in respect to the following categories: Education, Government process, Financial support and Business Processes. We aspire that GEM 2017/2018 can be a practical and valuable tool for improving the status of entrepreneurship in Cyprus.