The financial crisis of 2008 from a philosophical perspective 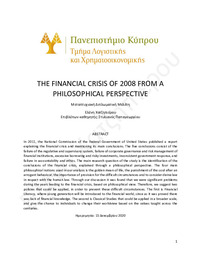 In 2011, the National Commission of the Federal Government of United States published a report explaining the financial crisis and mentioning its main conclusions. The five conclusions consist of the failure of the regulative and supervisory system, failure of corporate governance and risk management of financial institutions, excessive borrowing and risky investments, inconsistent government response, and failure in accountability and ethics. The main research question of the study is the identification of the conclusions of the financial crisis, explained through a philosophical perspective. The four main philosophical notions used in our analysis is the golden mean of life, the punishment of the soul after an arrogant behaviour, the importance of provision for the difficult circumstances and to consider divine law in respect with the human law. Through our discussion it was found that we were significant problems during the years leading to the financial crisis, based on philosophical view. Therefore, we suggest two policies that could be applied, in order to prevent these difficult circumstances. The first is Financial Literacy, where young generation will be introduced to the financial world, since as it was proved there was lack of financial knowledge. The second is Classical Studies that could be applied in a broader scale, and give the chance to individuals to change their worldview based on the values taught across the centuries.