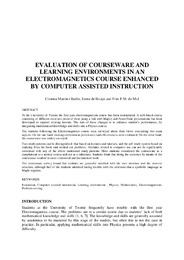 At the University of Twente the first year electromagnetism course has been restructured. A web-based course consisting of different exercises (most of them using a link with Maple) and PowerPoint presentations has been developed to support existing lessons. The aim of these changes is to enhance student’s performance, by integrating mathematical knowledge and skills into a Physics course. The students following the Electromagnetics course were surveyed about their views concerning two main aspects. On the one hand learning environment preferences and effectiveness were evaluated. On the other hand, the courseware was widely surveyed. Two study patterns can be distinguished: that based on lectures and tutorials, and the self study system based on studying from the book and worked out problems. Attitudes related to computer use can not be significantly correlated with any of the above mentioned study patterns. Most students considered the courseware as a complement to a normal course and not as a substitute. Students think that doing the exercises by means of the courseware resulted in more elaborated and documented work. The courseware survey found that students are generally satisfied with the user interface and the exercise selection, although half of the students admitted having trouble with the strictness that a symbolic language as Maple requires.