Images of the electromagnetic spectrum on the internet 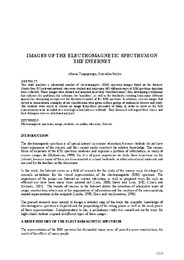 This work analyzes a substantial number of electromagnetic (E/M) spectrum images found on the Internet. Ninety-five (95) relevant network sites were studied and sixty-nine (69) different ways of E/M spectrum depiction were collected. These images were studied and analyzed in several ‘structural items’, thus developing a taxonomy that indicates the problems, the solutions, the ‘mistakes’, as well as the deadlocks resulting from many different approaches attempting to represent the theoretical model of the E/M spectrum. In addition, several images that served as characteristic examples of our classification were given to three groups of students to observe and study. The students were asked to choose an image from those presented to them, in order to serve as the best representation to be included in a new high-school physics textbook. They discussed and argued their choice and their dialogues were recorded and analyzed.