Difficulties in representing microscopic phenomena on the internet: the case of brownian motion 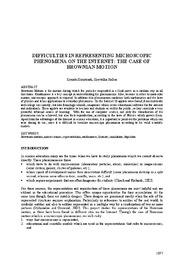 Brownian Motion is the motion during which the particles suspended in a fluid move in a random way in all directions. Randomness is a key concept in understanding the phenomenon. Also, because it refers to molecular motion, microscopic approach is required. In addition this phenomenon combines both mathematics and the laws of physics and it has applications to everyday phenomena. On the Internet 30 applets were found, from university and college sites mostly, but also from high schools, companies which create educational software for the internet and individuals. These applets are available to teachers and students as well to the public, so they constitute a very phenomena can be achieved, but also their reproduction, according to the laws of Physics which govern them. Apart from the advantages of the Internet in science education, it is important to point out the problems which can arise during its use, since it is difficult to visualise microscopic phenomena according to the valid scientific models.