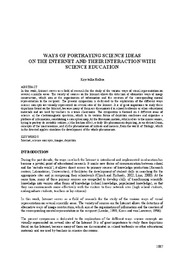 In this work, Internet serves as a field of research for the study of the various ways of visual representation on several scientific areas. The variety of sources on the Internet allows the detection of alternative ways of image construction, which aim at the organization of information and the creation of the corresponding mental representation in the recipient. The present symposium is dedicated to the exploration of the different ways science concepts are visually represented on several sites of the Internet. It is of great importance to study these depictions found on the Internet, because many of them are disseminated in school textbooks or other educational materials and are used by teachers in science classrooms. The symposium is focused on 4 different areas of science: a) the electromagnetic spectrum, which in its various forms of depiction condenses and organizes a plethora of information, constituting a conceptual map, b) the Brownian motion, which refers to the microcosmos, trying to portray its invisible entities, c) the friction effect, a daily life phenomenon depicting, in an abstract form, concepts of the macrocosmos, and d) the phenomenon of mitosis and meiosis, from the world of Biology, which in the detected applets simulates the development of the whole phenomenon.