Designing a task for expressing randomness 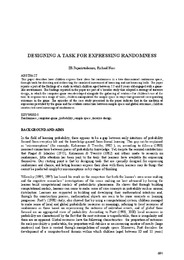 This paper describes how children express their ideas for randomness in a two-dimensional continuous space, through tools for directing and redirecting the simulated movement of bouncing and not bouncing balls. The paper reports a part of the findings of a study in which children aged between 5.5 and 8 years old engaged with a gamelike environment. The findings reported in the paper are part of a broader study that adopted a strategy of iterative design, in which the computer-game was developed alongside the gathering of evidence for children’s use of the tool. In response to a range of tasks, children manipulated the sample space in ways that generated corresponding outcomes in the game. The episodes of the case study presented in the paper indicate that in the medium of expression provided by the game and the evident connection between sample space and global outcomes, children constructed novel meanings of randomness.