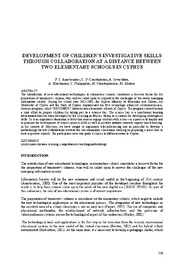 The introduction of new educational technologies in elementary schools constitutes a decisive factor for the preparation of tomorrow's citizens, who will be called upon to respond to the challenges of the newly emerging information society. During the school year 2001-2002, the Cyprus Ministry of Education and Culture, the University of Cyprus and the Bank of Cyprus implemented the first technology enhanced collaboration-at-adistance program, called “ODYSSEUS”, between two elementary schools of Cyprus. The program centred around a joint effort to prepare children for taking part in a science fair. The science fair is a non-formal learning environment that has been developed by the Learning in Physics Group as a context for developing investigative skills. Its is an organized educational activity that aims to engage students with science as a process of inquiry and to promote the development of science process skills as well as positive attitudes towards inquiry based learning. In the context of Odysseus, we have sought to implement teleconferencing and in particular to develop a methodology for tele-collaboration between the two elementary classrooms working on preparing science fairs in their respective schools. The participants were two grade 6 classes in different towns in Cyprus.