Talking about evidence in inquiry-based science: what role can software scaffolds play? 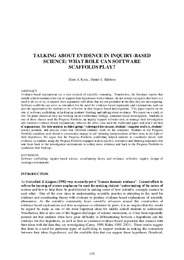 Evidence-based explanations are a core element of scientific reasoning. Nonetheless, the literature reports that middle school students often fail to support their hypotheses with evidence, do not always recognize that there is a need to do so, or try to support their arguments with ideas that are not grounded in the data they are investigating. Software scaffolds can serve as reminders for the need for evidence-based arguments and explanations, and can provide opportunities for students to be reflective in their inquiry-based investigations. This paper reports on the role of software scaffolding in facilitating students' thinking and talking about evidence. We report on a study of two 7th grade classes as they are working on an evolutionary biology, computer-based investigation. Students in one of these classes used the Progress Portfolio, an inquiry-support software tool, to manage their investigation and construct evidence-based explanations, whereas the other class used the traditional paper and pencil method of organization. Our data analysis included groups’ videotaped discussions, students’ computer artifacts, students’ science journals, and process video that followed students' work on the computer. Students in the Progress Portfolio condition were found to consistently engage in self-initiating interpretations of their data, in the light of their hypothesis. We argue that the Progress Portfolio scaffolding helped students to coordinate theory with evidence, as students using the Progress Portfolio engaged in data-specific, evaluative and planning sequences that sent them back to the investigation environment to collect more evidence and back to the Progress Portfolio to synthesize their findings.