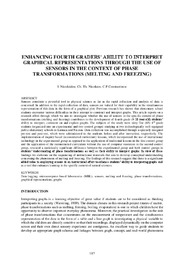 Sensors constitute a powerful tool in physical science as far as the rapid collection and analysis of data is concerned. In addition to the rapid collection of data, sensors are valued for their capability in the simultaneous representation of this data in the form of a graphical plot. Previous research has shown that elementary school students encounter various difficulties in their attempt to construct and interpret graphs. This article reports on a research effort through which we aim to investigate whether the use of sensors in the specific context of phase transformations (melting and freezing) contributes to the development of fourth grade (9-10 year old) students’ ability to interpret, comment on and explain graphs. The subjects of the study were sixty five (65) 4th grade students (organized into an experimental and two control groups) studying at two technologically well-equipped public elementary schools in Larnaca and Nicosia. Data collection was accomplished through a specially designed pre-test and post-test, which were administered to the students before and after instruction, respectively. The implementation of inquiry-based (reconstructed curriculum) lessons, which incorporated the use of instructional technology in the experimental group as opposed to the application of traditional lessons in the first control group and the application of the reconstructed curriculum without the use of computer resources in the second control group, revealed a statistically significant difference between the experimental group and both control groups in students’ understanding of phase transformations as well as their ability to interpret graphs. In view of these findings we elaborate on the sequencing of instructional materials that aim to develop conceptual understanding concerning the phenomena of melting and freezing. The findings of this research suggest that there is a significant added value in employing sensors in an instructional effort to enhance students’ ability in interpreting graphs and as a tool that enhances learning in the specific context of natural sciences.