Introducing computer based learning in a rural community in uganda 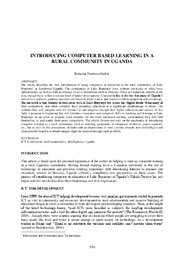 The article describes the first introduction of using computers in education in the rural community of Lake Bunyonyi in Southwest Uganda. The community at Lake Bunyonyi lives without electricity or other basic infrastructure, as well as with an absence of civic institutions such as libraries. There are numerous schools in the area, though these reflect a similar level of under-development. Contrary to this is the fact that many of Uganda’s universities and post-graduate institutes are based in urban centres and employ modern equipment and technology. The net result is that students in rural areas such as Lake Bunyonyi live across the ‘digital divide’ from many of their compatriots, and often complete their secondary education at a significant disadvantage to them - the students they will compete with for entrance to and progress through their higher education and careers. In this light, a program is beginning that will introduce computers and computer skills to teaching and learning at Lake Bunyonyi in an effort to prepare local students for the more advanced learning environment they will find themselves in, and render them more competitive. The article focuses not only on the mechanics of introducing computer learning to a rural community, such as sourcing equipment, development of electric power capacity, etc., but as well on the perceptions, attitudes and predispositions of rural citizens towards new technologies and what possible benefits or disadvantages might be realized through such an effort.