Supporting data-rich inquiries on the world-wide-web 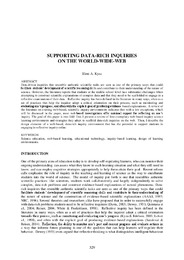 Data-driven inquiries that resemble authentic scientific tasks are seen as one of the primary ways that could facilitate students’ development of scientific reasoning skills and contribute to their understanding of the nature of science. However, the literature reports that students at the middle school level face substantial challenges when attempting to construct scientific explanations of complex data and that they need to be scaffolded to engage in a reflective examination of their data. Reflective inquiry has been defined in the literature in many ways, often as a set of practices that help the inquirer adopt a critical orientation on their process, such as monitoring and evaluating one’s progress, and often with the explicit goal of producing evidence-based explanations. A review of the literature on existing web-based, scientific inquiry environments indicates that with a few exceptions, which will be discussed in the paper, most web-based investigations offer minimal support for reflecting on one’s inquiry. The goal of this paper is two-fold: first, I present a review of four exemplary web-based inquiry science learning environments and strategies they adopt to scaffold data-rich inquiries on the web. Then, I describe the design elements of a web-based, data-rich inquiry environment that has the potential to support students in engaging in reflective inquiry online.