Creating games or developing programs? Documenting the use of stagecast creator as modeling tool in elementary science 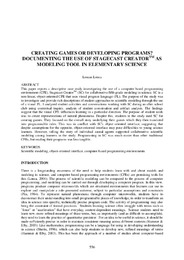 This paper reports a descriptive case study investigating the use of a computer-based programming environment (CPE), Stagecast CreatorTM (SC) for collaborative fifth grade modeling in science. SC is a non-linear, object-oriented CPE that uses visual program language (PL). The purpose of the study was to investigate and provide rich descriptions of student approaches to scientific modeling through the use of a visual PL. I analyzed student activities and conversations working with SC during an after-school club using contextual inquiry, analysis of student conversation and artifact analysis. The findings suggest that the visual CPE influences learning in a particular direction. The purpose of student work was to create representations of natural phenomena. Despite this, students in the study used SC for creating games. They focused on the overall story underlying their games which they then translated into programmable rules. This was in conflict with SC's object-oriented interface, suggesting that despite assumptions for the opposite, object-oriented interface may pose difficulties to young science learners. However, telling the story of individual causal agents supported collaborative scientific modeling among learners in the study. Programming in SC was much easier than other traditional CPEs, but reading their programs was less tangible.