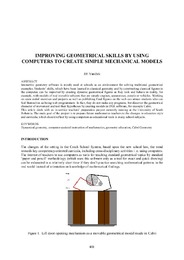 Interactive geometry software is mostly used at schools as an environment for solving traditional geometrical examples. Students’ skills, which have been learned in classical geometry and by constructing classical figures in the computer, can be improved by creating dynamic geometrical figures as they look and behave in reality, for example, with models of real movable subjects that are simple engines, apparatuses, people or vehicles. Working on open ended exercises and projects as well as publishing final figures on the web can attract students who can feel themselves as being web programmers. In fact, they do not make any programs, but discover the geometrical character of movement and test their hypotheses by creating models in DGE software, for example Cabri. This article deals with an in-service teachers’ preparation project currently running at the University of South Bohemia. The main goal of the project is to prepare future mathematics teachers to the changes in education style and curricula, which should reflect by using computers as educational tools in many school subjects.