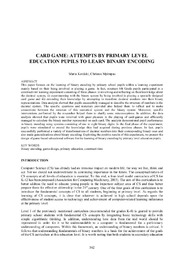 This paper focuses on the learning of binary encoding by primary school pupils within a learning experiment mainly based on their being involved in playing a game. In fact, nineteen 6th Grade pupils participated in a constructivist learning experiment consisting of three phases: i) reviewing and reflecting on their knowledge about the decimal system, ii) experimenting with the binary system by being involved in playing a specially-designed card game and iii) extending their knowledge by attempting to transform decimal numbers into their binary representations. Data analysis showed that pupils successfully managed to describe the structure of numbers in the decimal system. The specific questions and materials provided also helped them to reflect and to make connections between the structure of this numerical system and the binary system. Moreover, specific interventions performed by the researcher helped them to clarify some misconceptions. In addition, the data analysis showed that pupils were involved with great pleasure in the playing of card-games and efficiently managed to calculate the binary number represented on each card. The analysis demonstrated pupil performance in binary encoding using systems consisting of one to eight binary digits. In the final phase of the experiment, pupils were stimulated to extend the knowledge they had acquired during previous phases. In fact, pupils successfully performed a variety of transformations of decimal numbers into their corresponding binary ones and also made generalizations about binary encoding. Exploiting the positive results of this experiment, we present the design of game-based educational software for the learning of binary encoding by primary level education pupils.