Modeling with stagecast creator: a video-case Study describing the process of Developing, evaluating and refining models of Accelerated motion in elementary school 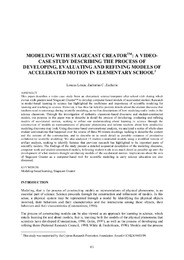 This paper describes a video case study from an elementary science/computer after-school club during which eleven sixth graders used Stagecast Creator™ to develop computer-based models of accelerated motion. Research in model-based learning in science has highlighted the usefulness and importance of scientific modeling for learning and teaching in science. However, it has thus far failed to provide details about the student discourse that teachers need to encourage during scientific modeling, as well as descriptions of how modeling really looks in the science classroom. Through the investigation of authentic classroom-based discourse and student-constructed models, our purpose in this paper was to describe in detail the process of developing, evaluating and refining models of accelerated motion, seeking to refine our understanding about learning in science through the construction of models as representations of physical phenomena and inform teachers about how productive modeling discourse may look. Using discourse-based conversational analysis, we analyzed a series of whole-class student conversations that happened over the course of three 90-minute meetings, seeking to describe the context and the content of the conversation, and to describe in as much detail as possible instances of productive collaborative scientific modeling. We also analyzed 15 student-constructed models using a modified version of artifact analysis, seeking to identify features that previous research has highlighted to be important parts of scientific models. The findings of the study present a detailed sequential description of the modeling discourse, computer work and student-constructed models, following student work in as much detail as possible up until the development of what students thought satisfactory models of the accelerated motion. Implications about the role of Stagecast Creator as a computer-based tool for scientific modeling in early science education are also discussed.