A psychoanalytic complacency of the text: Two romanian cultural cases of the narrative fetish 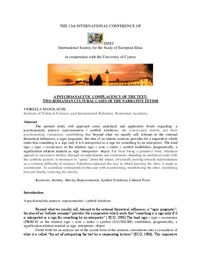 The present study will approach some analytical and applicative levels regarding: a psychoanalytic pattern: representation / symbol/ fetishism;; the consecrated models and their psychoanalytic exhaustion, establishing that beyond what we usually call, tolerant to the external theoretical influences, a signs pragmatic, the idea of an infinite semiozis provides for a imperative which emits that something is a sign only if it is interpreted as a sign for something by an interpreter. The triad sign � type � occurrence or the relation sign � icon � index � symbol establishes, pragmatically, a signification relation marked as sign -interpreter- object. Far from being a primitive form, fetishism appeals to successive strokes, through (re)adjustments and corrections, disputing its analytical route with the symbolic pattern; it renounces to "speak" about the object, awkwardly moving towards representation as a common difficulty of analysis. Fetishism expresses the way in which knowing the other is made as assimilation. To assimilate corresponds in this case with transforming, metabolizing the other, identifying him and finally, removing his alterity.