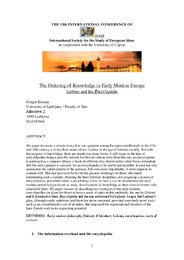 My paper discusses a certain worry that was apparent among European intellectuals in the 17th and 18th century, a worry that sounds all too familiar in the age of internet, namely, that with the progress of knowledge, there are simply too many books. I will focus on the idea of encyclopedias being a possible remedy for this. In various texts from this era, an encyclopedia is portrayed as a compact library, a book of all books that almost makes other books redundant. But for such a project to succeed, for an encyclopedia to be useful and readable, it must not only summarize the achievements of the sciences, but even more importantly, it must organize its content well. This had proven to be by far the greatest challenge for those who dared undertaking such a venture. Drawing the lines between disciplines and imagining a system of their divisions and subdivisions is an arbitrary affair. In fact, it can be claimed that the early modern period had produced as many classifications of knowledge as there were reformers who conceived them. My paper focuses on describing two strategies of the early modern encyclopedias (or plans for them) to keep a sense of unity in this multitude: the one by Diderot and d�Alembert in their Encyclop?die and the one envisioned by Leibniz. I argue that Leibniz�s plan, although overly ambitious and therefore never executed, provided some truly novel tools, such as an comprehensive use of an index, that surpassed the organizational structure of the later French work in its organizing potential.