Thinking Now Occurring and the God Who May Be: David Leahy and Richard Kearney 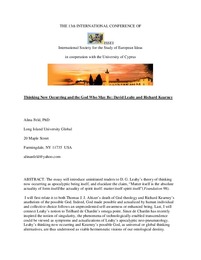 The essay will introduce uninitiated readers to D. G. Leahy’s theory of thinking now occurring as apocalyptic being itself, and elucidate the claim, Matter itself is the absolute actuality of form itself/the actuality of spirit itself: matter itself spirit itself (Foundation 98). I will first relate it to both Thomas J. J. Altizer’s death of God theology and Richard Kearney’s anatheism of the possible God. Indeed, God made possible and actualized by human individual and collective choice follows an unprecedented self-awareness or enhanced being. Last, I will connect Leahy’s notion to Teilhard de Chardin’s omega point. Since de Chardin has recently inspired the notion of singularity, the phenomena of technologically-enabled transcendence could be viewed as symptoms and actualizations of Leahy’s apocalyptic neo-pneumatology. Leahy’s thinking now occurring and Kearney’s possible God, as universal or global thinking alternatives, are thus understood as viable hermeneutic visions of our ontological destiny.