The New Tridentine Moment in Global Politics?: Civil and Sectarian Religion and the United States in Crisis 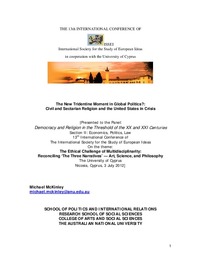 The end of the Cold War, which left the Soviet Union in a centrifugal state, concealed the fact that the United States enjoyed only a compromised victory. Since the destruction of the Berlin Wall the social, political, economic, and strategic vectors of the United States have led some scholars and commentators to describe the collective malaise as in terms reminiscent of the decline of the Roman Empire, or even worse, but the argument advanced in this paper is that there is compelling evidence to warrant a comparison with the period 1470 � 1530, the period of the Renaissance Popes. When the need for reform within the Western Church of the Latin Rite became so palpable, yet so frustrated, it provoked schism, and schism in turn was followed by widespread intolerance and war. Specifically, this paper argues that there are strong congruencies between the early period and the structural pathologies now afflicting the United States and they range from internal political economic corruption which fails its citizens to ambivalences and obsessions regarding the Middle East and Islam. Overall, the argument suggests that, failing a Tridentine reform project, the prospects for the immediate future are, once again, recklessness, intolerance, and the wars which beset declining great powers.