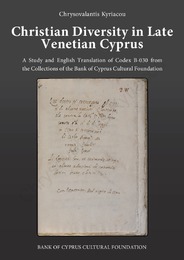 The publication of codex B-030 (English translation with historical introduction) from the Collections of the Bank of Cyprus Cultural Foundation is part of the research project “Aspects of multiconfessionalism and human geography in early modern Cyprus from the Venetians to the Ottomans” (POST-DOC/0916/0060), funded by the Cyprus Research and Innovation Foundation and hosted by the Bank of Cyprus Cultural Foundation. Codex B-030 provides exciting new information on Cypriot multiconfessionalism during the last decade of Venetian rule on the island (1560s). This important Venetian manuscript, a key source on the history and culture of Cyprus during the medieval and early modern periods, comprises a report on the religious errors, ceremonies, and customs of Cypriot Christian ethnoreligious communities (Greek Orthodox, Armenians, Copts, Maronites and Jacobites), as well as other documents of economic, social, and cultural interest. The text of the report provides a most vivid depiction of the mores of Cypriot Christian communities in an age of shifting boundaries and persisting sensitivities in matters of belonging. The study places Christian coexistence in sixteenth-century Cyprus within the broader context of European multiconfessional communities after the Reformation, exploring aspects of Christian diversity and representation, as well as emotional responses to multiconfessionalism.

The following license files are associated with this item:

Except where otherwise noted, this item's license is described as Attribution-NonCommercial-NoDerivs 3.0 Greece