Another way to teach non-congruency 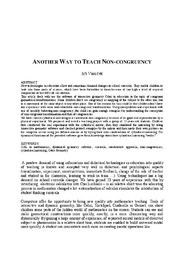 New technologies in education allow and sometimes demand changes in school curricula. They enable children to look into those parts of science, which have been forbidden to them because of too high a level of required imagination or too difficult calculations. This article deals with use the software of interactive geometry Cabri in education in the topic of congruent geometrical transformations. Some children don t see congruency as mapping of the subject to the other one, but as a movement of the same object to any other place. One of the reasons for this could be that children don t have any experience with some understandable non-congruent transformation. Using manipulation and experiment with one of sensibly behaving non-congruency, the child can gain enough examples for understanding the conception of non-congruent transformation and then of congruencies.We have chosen cylindrical mirroring as a convenient non-congruency because of its good real representation by a physical experiment. We prepared and tested a teaching project with a group of 12-years-old students. Children first conducted the real experiment with the cylindrical mirror, then they simulated the mirroring by using interactive geometry software and checked printed examples by the mirror and then made their own pictures on the computer screen using pre-defined macros or by trying their own constructions of cylindrical mirroring The dynamical functions of the provided software gave them knowledge about how cylindrical mirroring "works".