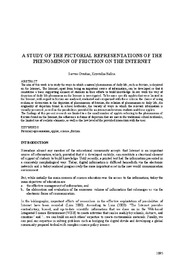 Τhe aim of this work is to study the ways in which a natural phenomenon of daily life, such as friction, is depicted on the Internet,. The Internet, apart from being an important source of information, can be developed so that it constitutes a basic supporting element of students in their efforts to build knowledge. In our work the way of depiction of daily life phenomena on the Internet is investigated. To be more specific applets that were located in the Internet, with regard to friction are analysed, evaluated and categorized with these criteria: the choice of using realism or abstraction in the depiction of phenomenon of friction, the relation of phenomenon to daily life, the originality of depiction found in school textbooks, the variety of ways in which the relevant information is visually presented, as well as the possibilities provided for an interaction between students and these applets. The findings of this present research are limited to a the small number of applets referring to the phenomenon of friction found on the Internet, the adherence in forms of depiction that are met in the traditional school textbooks, the limited use of realistic elements, as well as the low level of the provided interaction with the user.