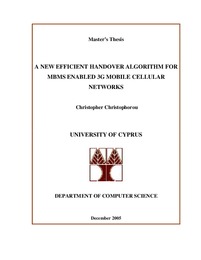 Initially, 3rd Generation (3G) Mobile Networks (also known as UMTS – Universal Mobile Telecommunications System) offered Telephony and Bearer Services1 for Point-to-Point communications using Dedicated Resources (Dedicated Channels - DCH) for the data transmission. Lately, with the introduction of technologies such as, IP Video Conferencing, Streaming Video and others, there is an increasing need for communication between one sender and many receivers, leading to the need of Point-to-Multipoint transmission. For the efficient distribution of these types of services in UMTS Network, the 3GPP organization proposed some enhancements on the UMTS Release-6 architecture that led to the definition of the Multimedia Broadcast Multicast Service (MBMS) system. MBMS is a Point-to-Multipoint service in which data is transmitted from a single source entity to multiple recipients, allowing the network resources to be shared. With the introduction of Multimedia Broadcast Multicast Service (MBMS) in 3rd Generation (3G) Networks (UMTS), the Radio Network Controller (RNC) on a per cell basis can use either Dedicated or Common (Forward Access Channel – FACH) resources to distribute the same content in a Cell. The use of Common Resources aims to overcome network congestion when a large number of users in a Cell request the same content, but if there are not enough users to justify the high power transmission of the Common Channel, then it is more efficient for the content to be provided on a Point-to-Point fashion (Dedicated Resources). Thus the mobile MBMS users that are on the move may have to deal with dynamic changes of network resources when crossing the cell edge (from Common to Dedicated resources and vice versa). This introduces new mobility issues regarding the handover procedure (MBMS Handovers), since until now, handover in UMTS Network have been considered only between Cells supporting the service on Dedicated Resources (DCH). Usually, the handover decision making is based on a comparison between an observed value and a predetermined threshold chosen in a manner so as to maximize the overall system capacity. The current Handover Algorithm efficiently achieves that when the handover is performed between Dedicated resources, but using the same algorithm when the handover is performed between Dedicated and Common resources the result will not be so efficient. This thesis proposes an enhanced MBMS Handover Algorithm which efficiently achieves increased cell capacity when the mobile users have to deal with these new types of MBMS Handovers. In order to accomplish this, new parameters have to be considered and a different approach has to be followed. Moreover, the new MBMS Handover Algorithm, instead of using a predefine threshold for the handover decision as the Current Handover Algorithm does, will use a dynamic estimation scheme that will take into consideration these new parameters with the purpose of maximizing the overall system capacity.