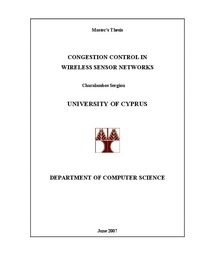 In wireless sensor networks (WSNs), nodes have very limited power due to hardware constraints. Packet losses and retransmissions resulting from congestion, cost precious energy and shorten the lifetime of sensor nodes. This problem motivates the need for congestion control mechanisms in WSNs. In this research we concentrate on event-based networks. In event-based networks, data packets are produced only upon the observation of specific events that satisfy pre-specified conditions. When a specific condition is satisfied, there may be a huge transmission of data packets, which, if not controlled, can easily lead to congestion. Congestion, especially in these networks, is highly undesirable, not just because of the obvious power consumption but also due to the fact that is able to destroy the networks’ mission. The data packets which are produced when an event- based network satisfies the pre- specified condition are critical for the success of the applications. The target of this Thesis is the development of a specific algorithm which is able to transmit these critical packets to the sink, safely, without throttling the data rate. Based on the above, a congestion control scheme is proposed. The target of this scheme is, during a congestion situation, to maintain the reliability of information flow to the sink. In order to maintain the data rate, we try to take advantage of the plethora of sensor nodes which are in the network and are not used during a session (i.e increase resource provisioning). Specifically the algorithm consists of three main parts: (i) Hierarchical Flooding which is used initially for the network discovery (ii) Hierarchical Tree Alternative Path (HTAP) algorithm in order to deal with the expected congestion situation and to safely forward the data packets to sinks (iii) Handling of powerless (dead) nodes. The HTAP (Hierarchical Tree Alternative Path) algorithm tries to solve a congestion situation locally “by- passing” the congested node through the creation of alternative paths form the source to the sink. This scheme has been implemented in MATLAB. Simulations have been conducted to evaluate this algorithm. Results show that HTAP algorithm can cope with congestion and maintain the reliability of data packets transmission to the sink. In addition it achieves good performance in terms of energy dissipation, latency and transmission efficiency.