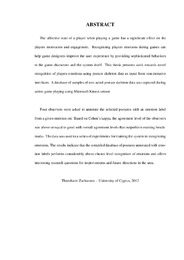 The affective state of a player when playing a game has a significant effect on the players motivation and engagement. Recognizing players emotions during games can help game designers improve the user experience by providing sophisticated behaviors to the game characters and the system itself. This thesis presents work towards novel recognition of players emotions using posture skeleton data as input from non-intrusive interfaces. A database of samples of non-acted posture skeleton data was captured during active game playing using Microsoft Kinect sensor. Four observers were asked to annotate the selected postures with an emotion label from a given emotion set. Based on Cohen’s kappa, the agreement level of the observers was above or equal to good with overall agreement levels that outperform existing benchmarks. The data was used in a series of experiments for training the system in recognizing emotions. The results indicate that the compiled database of postures annotated with emotion labels performs considerably above chance level recognition of emotions and offers interesting research questions for improvements and future directions in the area.