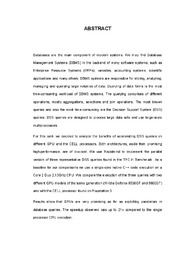 Databases are the main component of modern systems. We may find Database Management Systems (DBMS) in the backend of many software systems, such as Enterprise Resource Systems (ERPs), websites, accounting systems, scientific applications and many others. DBMS systems are responsible for storing, analyzing, managing and querying large volumes of data. Querying of data forms is the most time-consuming workload of DBMS systems. The querying comprises of different operations, mostly aggregations, selections and join operations. The most known queries and also the most time-consuming are the Decision Support System (DSS) queries. DSS queries are designed to process large data sets and use large-scale multiprocessors. For this work we decided to analyze the benefits of accelerating DSS queries on different GPU and the CELL processors. Both architectures, aside from promising high-performance, are of low-cost. We use Rapidmind to implement the parallel version of three representative DSS queries found in the TPC-H Benchmark. As a baseline for our comparisons we use a single-core native C++ code execution on a Core 2 Duo 2.13GHz CPU. We compare the execution of the three queries with two different GPU models of the same generation (NVidia Geforce 8500GT and 8800GT) and with the CELL processor found on Playstation 3. Results show that GPUs are very promising as far as exploiting parallelism in database queries. The speedup observed was up to 21x compared to the single processor CPU execution.