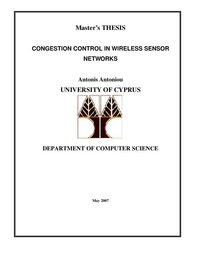 In wireless sensor networks (WSN), nodes have very limited power due to hardware constraints. Packet losses and retransmissions resulting from congestion cost precious energy and shorten the lifetime of sensor nodes. This problem motivates the need for congestion control mechanisms in WSN. In this thesis, we identify several network aspects, some of which are unique to sensor networks, that affect congestion, as for example: sensor reporting rate; number of MAC retransmissions; RTS/CTS mechanism; buffer size; average path length; ad-hoc routing protocols; and Minimum Contention Window. We also study congestion symptoms, such as delay and packet loss, for different Wireless Sensor Network Congestion Types. Moreover, since congestion affects on energy consumption and fairness, these are also examined. A brief analysis of the existing congestion control schemes shows that most of them are effective on mitigating congestion mainly through rate control and packet drop mechanisms, but do so at the cost of significantly reducing application fidelity measured at the sinks. Also very few techniques appear to adopt the approach of resource provisioning (e.g waking up nodes and ‘careful’ routing). Although these may just use extra resources and reroute traffic or use multiple paths they may result in high energy consumption. Based on the above research a hybrid theoretical framework of a congestion control scheme is proposed which is composed of two parts: (i) Throttle the traffic when applications’ fidelity requirements are met and / or energy consumed is more than the available budget, and (ii) Increase the network resources that appear in redundancy in sensor networks using multi-path routing, or inserting more sinks, or controlling the number of sources sensing an event. The resource control part of the scheme implements solutions that was previously tested with simulations in NS-2, where the results showed that such congestion control schemes can mitigate congestion and extend networks’ lifetime when using network topology knowledge and turning off the extra resources as soon as the source traffic decreases, to save energy.