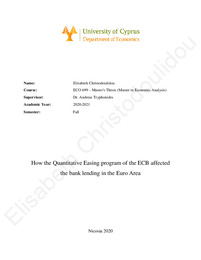 This study examines how the expanded asset purchase program (EAPP), also known as Quantitative Easing (QE), that the European Central Bank (ECB) introduced in March 2015 had affected the bank lending in the Euro Area (EA). Using monthly data from March 2015 to September 2020 in the context of a SVAR model, I find that banks in the EA increase their provision of loans to non-financial corporations after a positive shock in QE. I also find a reduction in the bank interest rate on loans to corporations and the long-term government bond yield. Overall, these results indicate that the EAPP had managed to activate the bank lending channel in the EA and incentivize banks to ease their financial conditions. This is an important conclusion for the European economy, given the bank-centric character of the financial system in the EA.