The amyloid hypothesis of Alzheimer’s Disease and its current treatment 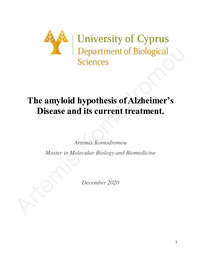 Alzheimer’s disease (AD), a progressive neurodegenerative disorder, is the commonest cause of dementia in the elderly population worldwide. It is a multifactorial disorder, characterized by extracellular β-amyloid peptide (Aβ) deposits, leading to the formation of senile plaques; and intracellular neurofibrillary tangles, composed of hyperphosphorylated Tau protein. There exist competing hypotheses regarding the causes of AD and their significance in AD progression. Therefore, this bibliographical review focuses on detailing the Aβ hypothesis thus explaining the generation of Aβ peptides from amyloid precursor protein (APP), and its accumulation leading to the formation of amyloid plaques. Over the last two decades, Aβ proteins have been extensively studied, not only for their role in the progression of the disorder, but also as a potential target for novel therapeutic strategies. This study also highlights several therapeutic approaches including the inhibition of β- and γ-secretase, the enhancement of Aβ clearance, the regulation of Aβ production; as well as, vaccination and immunization therapies. Many such approaches have reached clinical trials, yet they were abandoned due to low efficacy and side effects on AD patients. Currently the available treatments are focused on the cholinergic hypothesis of AD, and includes acetylcholinesterase inhibitors and N-methyl D-aspartate receptor antagonists. These drugs decelerate the progression of AD and offer symptom-relief to the patients. However, these drugs fail to achieve a definite cure. Thus, the enormous challenges AD poses to researchers is the urgent need to develop innovative therapeutics strategies.