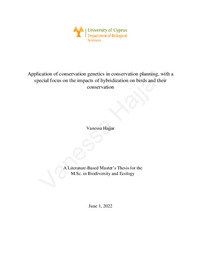 Biodiversity consists of all different live forms found in Earth. It is important to sustain it as it has several important aspects, such as maintaining ecosystems, helping with their proper functioning and it also plays a big part in providing ecosystem services. Conservation biology studies the loss of biodiversity on earth and its patterns, followed by conservation actions that aim to prevent extinction by implementing management plans. Large numbers of bird species are threatened or endangered, which makes conservation planning a more common topic nowadays to help protect the species from extinction. Additionally, as a consequence of decreased population size, species will begin to suffer from reduced genetic diversity and inbreeding, which is when conservation genetics is involved. Conservation genetics have been an important discipline for a long time, and its inclusion has been discussed throughout the years. It deals with genetic factors that are causing rarity or extinction of a specie, and uses genetic markers in order to resolve taxonomic uncertainties and to help in reconstructing phylogenetic trees. Genetic diversity is important in terms of conservation, as it provides species with adaptive potential that increases their chance of survival when ecosystems go through changes. The field of conservation genetics addresses several aspects that are important for conservation planning such as (i) the extinction risk of small populations, (ii) the delimitation of conservation units and (iii) the effects of hybridization., which will be the main focus of this thesis. Smaller populations are vulnerable to inbreeding, which can lead to inbreeding depression, this phenomenon might lead to the extinction of the species, as more deleterious alleles will be fixated and the population size keeps on decreasing. Conservation genetics also helps in delineating conservation units such as Evolutionary Significant Units (ESUs) and Management Units (MUs). As for hybridization, species might interbreed after expanding their geographical range, or after mating with invasive species, which may result in negative effects on fitness. This is where hybridization between species may lead to genetic swamping, fitness decrease and loss of important alleles. Hybridization has several effects on the affected species, and can have positive or negative effects, that ought to be understood for conservation planning. The focus in this thesis will be on conservation genetics in regards to hybridization in bird species interacting and interbreeding together. The goal is to understand the negative and positive consequences of hybridization on species’ survival and adaptation, which may vary in different cases and the importance of including genetic data in conservation planning and how conservation genetics helps with hybridization. After the literature review, it is clear that hybridization is affecting populations differently, in some cases the hybrids are viable, in others they are not, deleterious genetic processes are as a result contributing to the loss of rare alleles. Following the results of studies that have used conservation genetics, it is recommended that conservation planners take into consideration genetic data when implementing plans as it might reveal more important threats on the molecular level.