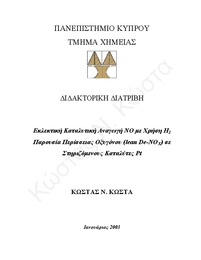 The present Doctoral Thesis work concerns the synthesis, characterisation, catalytic performance and mechanistic studies (use of 18O2 and 15NO isotopes) of new supported Pt catalysts for the NO/H2/O2 lean de-NOx reaction. In particular, an in-depth investigation of the effects of support chemical composition and metal loading (wt.% Pt) on the activity (conversion and TOF(s-1)), N2 selectivity, and stability with time on stream (in the presence of 5% H2O and 20 ppm of SO2) was conducted. The present work provides also fundamental kinetic and mechanistic information for the NO/H2/O2 lean de-NOx reaction over supported-Pt catalysts. It was found for the first time that the mechanism of N2 production strongly depends on the nature of the support. In particular, it was found that the chemical composition of support affects the formation of different active adsorbed intermediate NOx species on the support or Pt metal surface, and the metal-support interface. The performance of in situ mechanistic studies (SSITKA experiments with the use of DRIFTS and Mass Spectroscopy) have revealed for the first time that the mechanism of the NO/H2/O2 reaction involves the spillover of NOx species from the support to the Pt metal surface. The systematic studies conducted within the framework of the present work led to the synthesis by the Sol-Gel method of a Pt/Mg-Ce-O supported catalyst with a remarkable catalytic behaviour towards the NO/H2/O2 reaction. In particular, the Pt/Mg- Ce-O catalyst was found to present the highest site reactivity (Turn Over Frequency, TOF), specific activity (per gr of Pt metal), and N2 selectivity ever reported for the NO/H2/O2 reaction in the 100-300oC low-temperature range. Moreover, this catalyst presents an excellent stability with reaction time in the presence of H2O and SO2 in the feed stream of NO/H2/O2. Most of the results concerning the Pt/Mg-Ce-O catalyst have been evaluated and honoured by the European Federation of Catalysis Societies (EFCATS) with the 1st award during the 1st EFCATS School on Catalysis held in Prague (April 2001). It should also be noted that this catalyst has already been submitted for a Spanish patent issue (Feb. 2002). Part of the present Doctoral Thesis work also concerns the mathematical modelling of the mechanism of the ´Oxygen Storage Capacity´ phenomenon over a model Pd/CeO2 catalyst. For the achievement of this goal, the dynamic pulse injection technique of CO and O2 was used. It is worthwhile to notice that it is the first time that modelling of this kind of dynamic experiment is reported in the open literature for the study of the Oxygen Storage Capacity phenomenon over Noble Metal supported catalysts. The results of this work revealed that the transient CO oxidation rate on PdO/Pd is about 1.2-1.6 times higher than the back-spillover rate of oxygen from the ceria surface/subsurface to the PdO/Pd surface in the 500-700oC range. It was also found that the mechanism of CO oxidation over PdO/CeO2 in the 500-700oC range follows the Eley-Rideal than the Langmuir-Hinshelwood one.