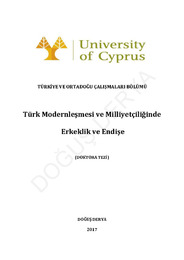 This PhD thesis, deals with the connection between the Enlightenment, imagination processes of modern nations and construction of modern masculinities in the Western and non-Western contexts. While explaining the effects of Western modernity and colonialism on the nationalisation processes of the non-Western contexts, the thesis attempts to shed light on the post-colonial discourses and constructions of gender in non-Western nationalisms, especially in the Ottoman-Turkish modernisation practices. In order to show the ways in which the Western orientalist discourses about modernisation and masculinity had affected the desires and anxieties of the ruling male elites, the study attempts to explain ideological -discursive continuities and changes between the late Ottoman and the early Republican hegemonic masculinities. In this way, the thesis scrutinizes the roles of discursive configurations of gender, modernity and orientalism, both in shaping the gendered desires and anxieties of Turkish nationalism and in constructing the modern Turkish men. Finally, the study examines Turkish national representation of Cyprus as "babyland" and show the ways in which the so-called national case, the Cyprus Case, is in fact a case of the anxieties of modern Turkish masculinity.